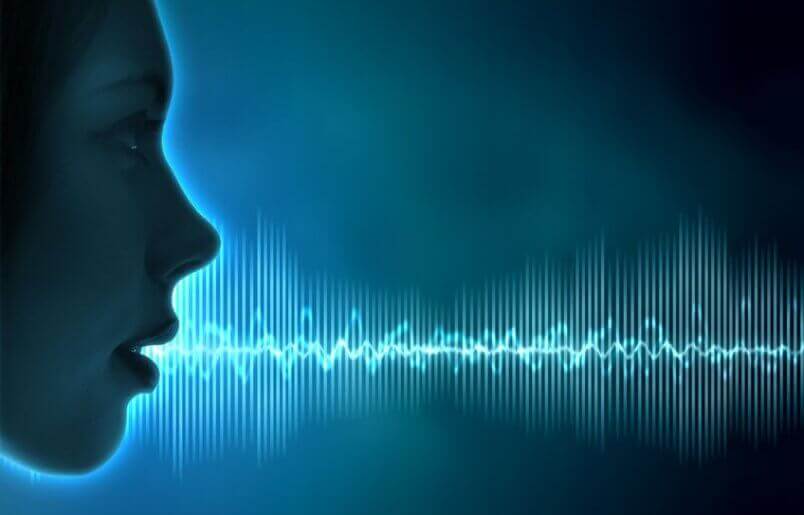 Our hearing is incredible.  A far off whisper, or the deafening roar of a jet engine, the power of a metal band, and everything else in between … they all cause air to move back and forth, and when that movement hits our ears, we hear sound.   In this lesson, you’ll:

If you understand the concept of the semitone and the octave, you will make more sense of guitar and piano sounds and shapes when we start to explore these in the lesson 3.

Make sure you’ve read working with emuso lessons first.  There are no other pre-requsites.

Let’s begin by taking a look and a listen to the very stable sound made by two piano keys, where the key to the right is 12 along from the key to the left. This sound is called an octave. Below you’ll learn the definition of an octave. 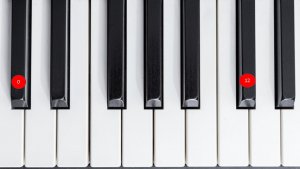 Try a couple of tests on creating octaves.

While the piano is still showing in emuso,  click the pitch strip button to show the full strip.  Now move the mouse over the piano keys from the circle on the left to the circle on the right, and watch the strip.  Notice how the name shown on the strip is identical each time the left or right circle is moved over.  We’ll see below that we get a family of pitches, that each form one or more octaves with the other members of the family.  These all get the same basic name.  We’ll explore this a bit more once we’ve looked at some properties of sound.

Some Properties of Sound

When you pluck a guitar string or draw a bow across a violin string, these cause the string to vibrate back and forth.  You can literally see this vibration on the string.  On a guitar, this sets up further vibrations in the neck and body, causing the surrounding air molecules to vibrate, at the same rate as the guitar strings.  These vibrations (called sound waves) spread out through the air until it arrives at our ears where the eardrum is vibrated by the sound waves as they arrive.  This causes the inner ear to send signals to the brain that we interpret as music coming from a guitar or piano or drum or a singer, and so on.

The number of times a string, or the air, or our eardrum, moves back and forth a second), is known as the frequency of the vibration.  Recording engineers talk about a sound having a “frequency of 440 Hertz (Hz)” … meaning the vibration is occurring 440 times a second. Recording equipment allows different frequencies to be boosted or cut, allowing different instruments to stand out more in the overall sound.

We hear fast vibrations as more treble sounds and slow vibrations as more bass sounds.  When we press down a guitar string onto the guitar neck (“fret a string”), this causes the string to come into contact with the fret in front of the finger (nearer the guitar body).  This means the string can only vibrate from that fret up to the bridge.  Shorter and tighter strings vibrate faster. 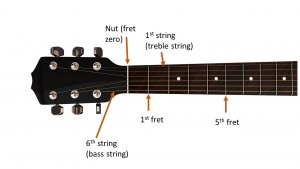 When we strike a piano key this causes a hammer to hit a small group of strings inside the piano.  Look in a piano and you’ll see the strings associated with the piano keys get progressively shorter as we approach the right edge of the piano.  The hammer sets the strings into vibration, as above.

With an electric guitar, the vibrations of the string(s) cause a small electric signal to be generated by the pickups.   This signal mimics these vibrations (the combined fundamental and harmonics) and can be sent to an amplifier, where the signal gets made stronger to be sent on to loudspeakers.  In turn, these speakers vibrate to the same pattern but moving the air with much more energy, so we hear the effect much louder.  Or that same signal from the pickups can be sent to an analogue to digital converter, for recording by software within a digital audio workstation (or indeed recorded in analogue form onto tape).

If one frequency is double another one (for example, 880 Hz and 440 Hz), these are said to be an octave apart.  If we listen to two pitches played on an instrument whose fundamental frequencies are an octave apart, these pitches sound very strongly related to each other, as you’ve heard from above.  On piano, we can choose any piano key, and then another one that is twelve piano keys to the right (or left), and together, these two keys produce pitches an octave apart.  If we start at the left most piano key, and keep choosing the next octave pitch, we end up with somewhere from five to eight pitches (depending on how many keys the piano has), each twelve keys apart.  Any one of these pitches forms one or more octaves with each of the remaining pitches in this group.  On guitar, the same is true just using one string, playing pitches 12 frets apart (e.g fret zero and fret 12).  You’ll learn in another lesson that there are four movable shapes for creating an octave on guitar.

Modern Western instruments are designed to produce pitches that are one or more semitones apart.  This is based on mathematics … if we multiply the (fundamental) frequency of any pitch by a magic number (1.0594), this slightly larger frequency is said to be a semitone higher, or we say the two pitches are a semitone apart. Let’s explore this.  (If you’re mathematically inclined, there is an explanation of how this number is chosen at the end of this lesson)

Fretted Instruments and the Semitone

Western instruments, such as guitar, bass, mandolin, banjo, and so on, are built to produce pitches a semitone apart.  By carefully positioning the frets, the resulting string lengths at each fret are such that fretting any two adjacent frets on the same string produces two pitches whose fundamental frequencies are a semitone apart.  Choose any fret, and 12 frets higher on the same string produces the octave.

This next example shows sixteen consecutive pitches on the guitar, with the choice of fret and string for the solid red pitch (the “anchor” as emuso calls it) being arbitrary. Experiment pressing the computer keyboard letter “i” (lowercase) to see how the labelling changes. Lookout for when the labels run from zero to eleven and start again at zero at the right.  Observe the colours used.  Look how the interval strip colours match.  Move your mouse over the pitches on the guitar, and watch what happens on the interval strip.  Press the keyboard character ‘h’, move the mouse along a string, and watch the clock.  See how the clock colours match up.  Set the playback button (top left in emuso) to melodic, and press the button.  Try CTL-left-clicking around the neck, and hit play after each click.  Can you hear the same sound flavour, just higher or lower?  For fun, press the computer keyboard letter ‘b’ to see and hear this pattern on bass.  This time the pattern is laid out across the strings.  Click on the 4th string to move the anchor there, and hit play again.  Finally, press the letter ‘g’ to see this pattern across all strings on the guitar.

Above, you can see that same coloured pitches are an octave apart.  For example, the solid red pitch, 0, and its counterpart, 12 frets to the right, are an octave apart.  This octave has been divided into 12 pitches, labelled 0 to 11. The same block starts again, in the next octave, in the above diagram at the 13th fret, where we see some of that block (0, 1, 2, 3).  Any two adjacent pitches above are a semitone apart.  Move 12 frets to the right from the anchor, means the pitches have gone up by 12 semitones.

The exact analogy holds on piano.  It is convenient (though inaccurate) to think of the piano as one long guitar string, with around 60 frets or so.  Two adjacent piano key produce pitches that are a semitone apart.   Here is the same example, now on piano.

So, on guitar, no matter which string you choose, adjacent frets on that string produce pitches a semitone apart.

Now, with multi-string instruments (guitar, bass …) the tuning of the strings typically results in there being several places where the exact same pitch can be found.  It also means that the same interval, such as seven semitones, can be created in maybe a couple of different ways.  For example, here are two different ways to play seven semitones on guitar: 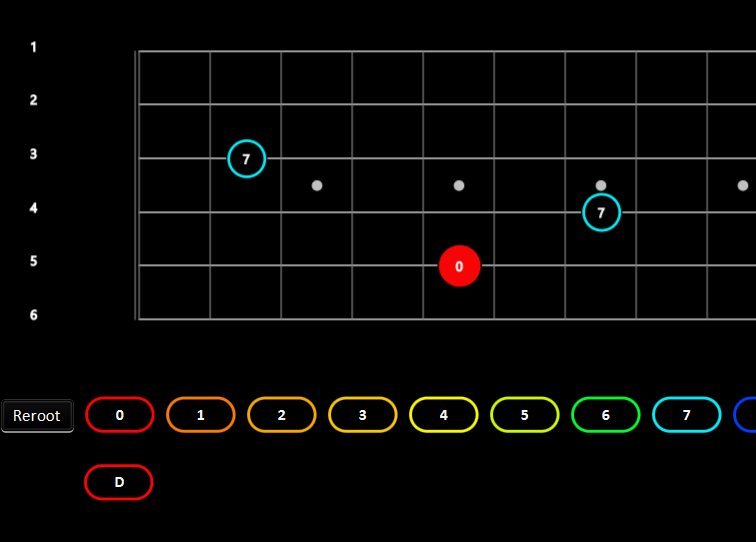 On piano, we haven’t got any of these complications.  There is only one way to play an interval of a particular number of semitones.  Two adjacent piano keys (either two adjacent white keys, or a black and a white key) produce sounds a semitone apart.

Here are a few more tests for you.  Good luck!

Where does 1.059 come from for the semitone?

For the mathematically inclined, the formula…

If you want to impress (or bore?) your mates down at the pub, you can pull this number out of your hat!