Guitar Tuning and Impact on all Shapes 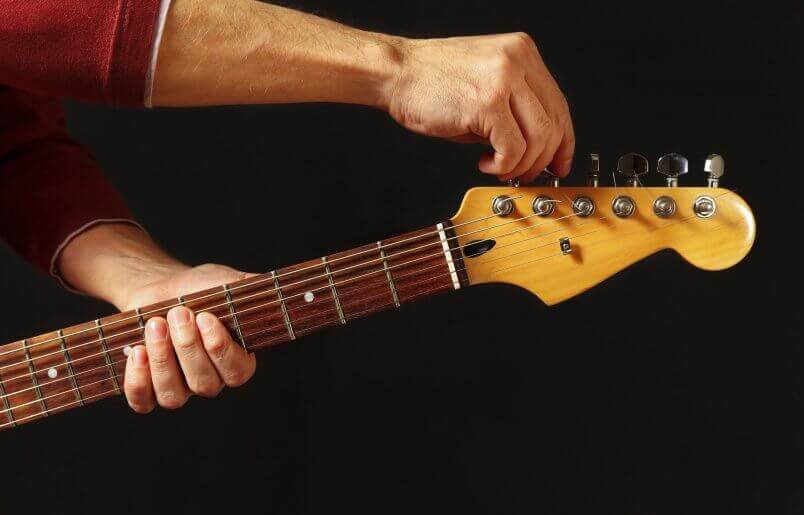 A guitar tuning is a choice of intervals to use between pairs of guitar strings.  This choice completely determines the physical shapes used creating music anywhere on guitar.  Hidden within this tuning is information on the intervals between any two pitches, as the distance apart (the number of semitones) between two open strings dictates the distance apart between two pitches on the two strings at any same fret (think of this as a vertical line shape, parallel to the fret) .  You are about to learn this in some detail.  Knowing this can start to unlock the guitar, once you realise

Here is a video that goes into this, that challenges you to think how to form some shapes once you’ve you’ve been show the concept.

And here so you can check your understanding are several tests … before you start,  move the mouse into the instrument window and press the letter “i” on your keyboard until the interval strip buttons become labelled 0 to 11.  In these tests, you need to identify a location on the specified string to make the requested interval with the anchor location.

The myriad of shapes all consist of interval in various combinations … but the fact is the interval shapes are few in number.  So, if you master interval shapes, and their names, you have a very solid foundation to work with and learn smarter with.

By the way, at the end of the test, you actually created most of a “scale”, given its interval makeup,  built from the anchor, at instrument locations of your choice.

If you’re still unclear , don’t worry.  Watch the video again, and experiment with the “Pitch” tool and try the tests again.  If you got most of the tests right, then fantastic … by the way, did you need pitch names (A, B, C …) for the above test?  That in itself is pretty cool.  It’s a strong hint that music is not about the pitch names of the actual pitches involved.  It’s all about the intervals involved … the semitones between the pitches

As we progress, you’ll be doing essentially lots more of what you’ve just done.