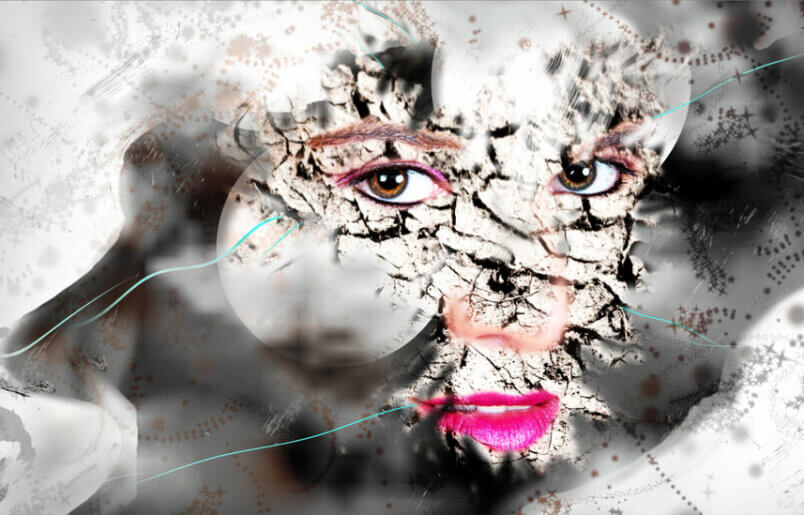 If you want to catch the attention of your listeners, and make them think a change is coming (even if it doesn’t!) then basically you need to play notes located a semitone above or below the chord tones,  of the moment. The semitone above always seems to create more edge than the semitone below.  As a very obvious example, play this chord (G, but with just one note altered, at the 4th fret on the treble E string (labelled “b2”).  This is one semitone above the chord root, so it will clash like crazy.  Want you audience to plug their ears (which obviously you don’t)? This will do it. 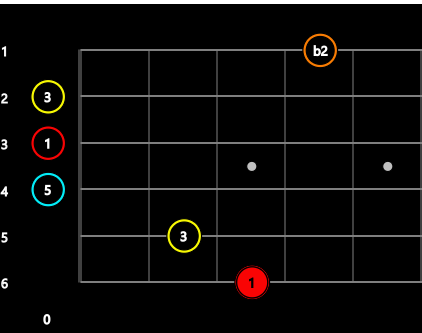 However, you can use this b2, just not as blatantly.  The name of the game is then to play such a note in a way that draws not quite as much attention to itself, yet is picked up enough by the listener, but only briefly before its gone.  You use it to “dress up” a chord tone.  In this video using G mixolydian, the b2 and the 7, which are one semitone either side of the tonic (G), are wrapped around it.  This gives a subtle edginess to the groove.  This is a great way of adding some ear-candy to your tune.

And here is the snappet for the above. This only works when reading this blog in emuso/Studio. Click on the eye-ear icon, and Rhythm-X will be loaded with the snappet.  Press “Start” to hear it and see the chords on”guitar”.  Press “Stop” to stop playback

If you want to create more expectations of an upcoming chord, then one way to do this is precede it by a chord rooted a 4th below or a 5th above, that contains a 3 and a b7.  We call this some kind of “dominant 7” chord.  For example, lets say we want to set up A-7.  Just these two pitches alone can do this.  In the next image, we see an A-7 chord, rooted on the 6th string.  Its chord tones are dimmed down, visually.  It is labelled with intervals relative to its root (A).  Showing brightly, the white circle is where the root, E, of the dominant chord would be (a 5th above the A), and where its 3 and b7 are located.

You can see that the 3 on the 4th string, at fret 6, is one semitone behind the root of A (which is located at fret 7 on that same string).  But it’s also a semitone above the b7 of the A-7 chord, so you could resolve this in either direction, when the A-7 comes round, or even slightly early, or even slightly late, dependng what effect you want.  Experiment. 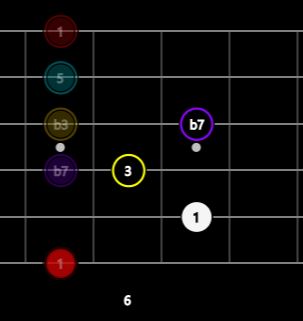 Try playing the highlighted 3 and b7 over an open A string, and let in ring for a bit, and then resolve  it to the b7 and b3, respectively, of the dimmed A-7 chord, with the open A still ringing.  It’s quite an intense sound.

Here is a video of a short example of minimal voicing chords, based on the above

Here is the corresponding snappet with just the chords (this only works when reading this blog inside emuso/Studio).  It’s based on A dorian, mostly just various pairs of  pitches, played over A, mainly featuring the above. Click the “eye-ear” icon.  This loads the snappet into Rhythm-X. Press “Start” on Rhythm-X to hear it and “Stop” to stop it. Remember you can change tempo, so you can jam against it. You can also transpose it, using Rhythm-X’s “Transpose…” dialogue.

It is one a family of scales that are used to raise expectations in the listener for a more stable, less tense sound to follow.

The last four members of the scale are very similar to the whole tone scale, as there are two semitones (aka “tone”) between each of these members.

Some possible layouts on guitar

First, on one string, so you can see the semitones.

To see the full range of possibilities, read this blog in emuso/Studio.  Then you can click on either of the following two shapes and it will load onto the virtual guitar, where you can move it to other tonics, or flip through the regions using the left- and right-arrows on your keyboard. 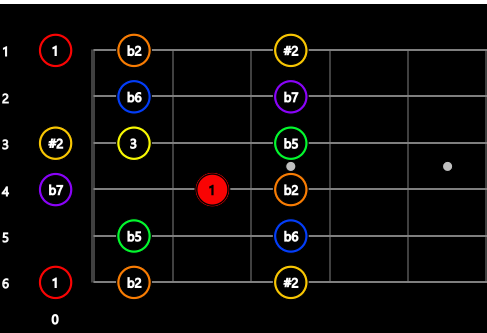 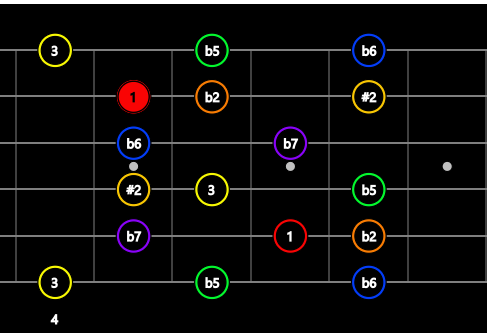 Example using the altered scale over an A Dorian groove.

When you play the altered scale, it works well when you weave it in with other ideas. It needs to be played melodically, rather than just as a linear scale up and down. You want to visualise one of the many altered chords running through it, and to be careful especially of the b2. So if you’re playing E altered over an E7(#9) the F shouldn’t get emphasised.

Here is a video showing an example melody on the above groove, using a combination of A dorian, A minor blues, and E altered.

And here is the snappet that includes the above melody. Again, this only works when reading this blog in emuso/Studio.

Coming soon there will one or more lessons for emuso/Studio users on the altered scale, providing many more examples, and other contexts, such as the blues, rock, and jazz.