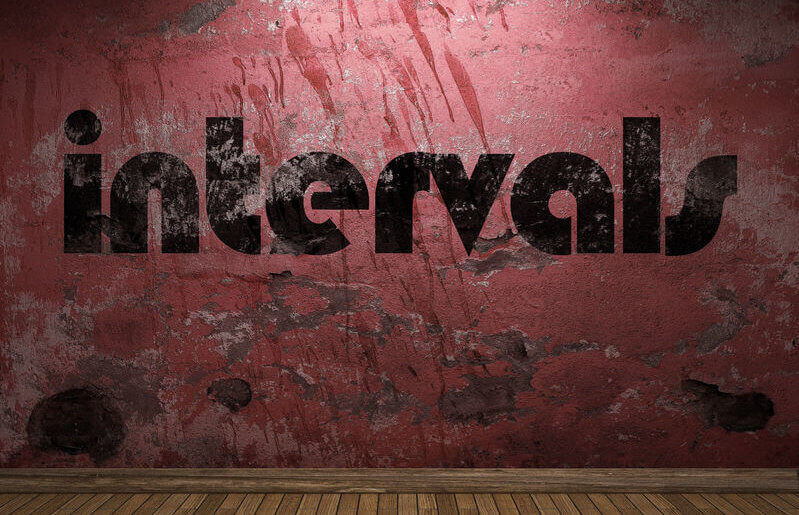 Sonically, an interval is the sound produced by two pitches some number of semitones apart.  The octave is the name of the interval formed by two pitches,  where the fundamental frequency of the upper pitch is 2x the frequency of the lower pitch (e.g. 440 Hz and 880 Hz make the sound of the octave).  440 Hz is one of the common tuning standards.  The note A4 on an instrument  is tuned to match in frequency.  On guitar this is produced at the 5th fret on the treble E string.    A six string guitar can produced several octaves of 440 Hz (110 Hz, 220 Hz, 880 Hz).  Using a guitar tuner, the open A string is tuned to 110 Hz.  Some guitar tuners just show “A” and will indicate when its input matches any octave of 440 Hz.

Western European music uses twelve specific frequencies per octave.  These frequencies make intervals of zero to eleven semitones with the first note in that octave.  If one of these pitches has fundamental frequency F, the pitch a semitone above it has frequency 1.059 x F.  Instruments designed to produce pitches in accordance with this are said to be using the equal temperament tuning system.  This system guarantees that 12 frets above (towards the body) any arbitrary fret on the same string will be create an octave with that arbitrary fret.  Ditto with piano keys that are 12 keys apart.  (Prior to this system, this wasn’t the case, meaning that there were a limited choice of musical keys (not piano keys!!)  to compose with, depending how the piano was tuned.  (See below, tuning systems)

Western European music uses the letters C, D, E, F, G, A, B for seven of the twelve pitches in an octave.

This makes a difference in how a chord, say, is written in music notation (for example to signify the intended root of a diminished seventh chord), or to indicate that a chromatic note is being used to ascend or descend from the previous note.

Of course, when improvising, we don’t care about these details … in fact we rarely care much about pitch names at all, being more concerned with intervals made with a chord root or scale tonic or tonal centre.

Interval names orginated from the seven note major scale as a reference, as a way of discussing and writing (music notation) intervals.  More on this a bit later.

The major scale requires pitches located at 0, 2, 4, 5, 7, 9 and 11 semitones from arbitrary choice of scale start note (tonic).  These pitches constitute the first through to the seventh scale member.  All octaves of these are implied as belonging to the major scale.  The name given to the interval made between a scale member, and the scale start note, includes which scale member it is (the first, second etc.)

Theory also names the following semitone distances .  These are simply some of the above occurring in the next octave (so, in the range of 12 semitones to 23 semitones above the initial arbitrary pitch of the tonic).

When combined with some of the intervals above, some amazing sounds are created.

The names minor, diminished, and augmented, are also used as follows.

Tuning systems have changed over the centuries.  Mean-tone temperament was used for tuning keyboards from the early 16th through to the 18th century.  This also divided the octave into 12 notes per octave.  But this tuning meant each black key had to be tuned to one of two specific pitches (for example, Eb and D# had different frequencies), normally chosen as C♯, E♭, F♯, G♯, and B♭. If the instrument was used to play a key that had an alternative note (such as D#), a strong dissonance arose.  This tuning system is said to produce a pleasing sound for triads (which were the most commonly used chords then).

These days, keyboards are tuned to the equal temperament.