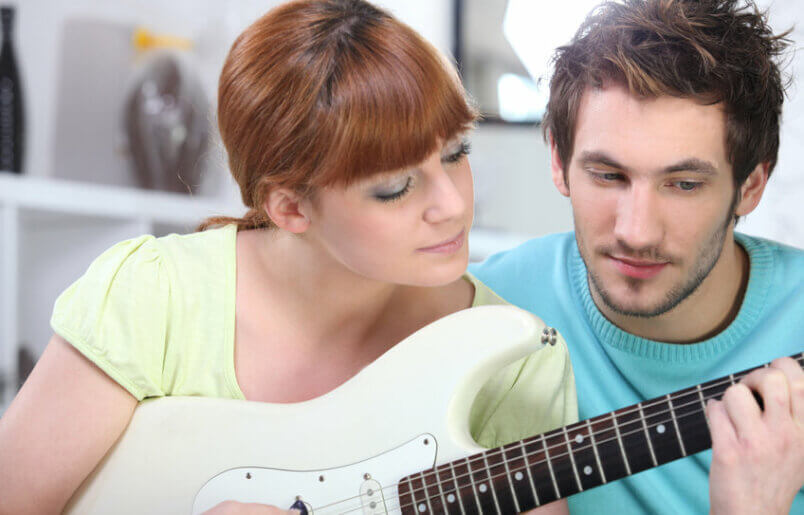 This is the follow up to How musical is a novice?

A chord is made up of a bunch of notes separated by various distances, and that overall collection of distances involved completely determines the sound of that chord. The distances involved are themselves determined by the guitar tuning, and which strings are involved. For now, this is a detail we can leave.

If you slide a chord shape along the neck, without changing the strings involved, these distances between the notes do not change. The notes change, but the distances don’t. The sound flavour stays the same … we can clearly hear this. Play this chord shape and listen… 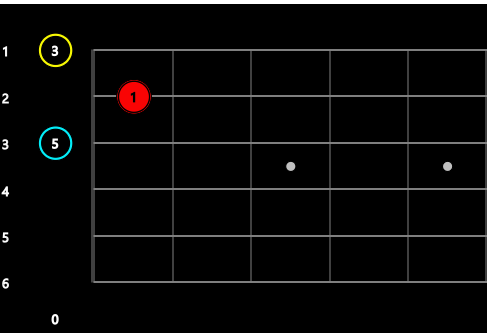 Now slide this shape towards the guitar body by two frets (you’ll have to use more fingers now, since the nut was doing part of the job with the previous shape) 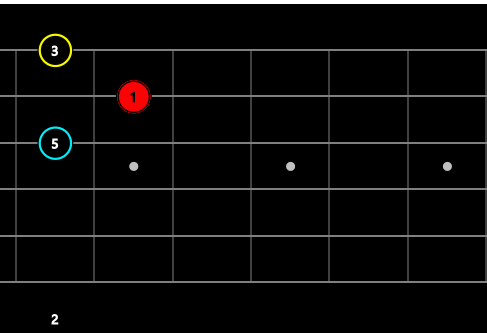 Do you agree it’s the same sound? But if you change the shape, the distances between (some of) the notes will change, and the sound flavour will change … for example. 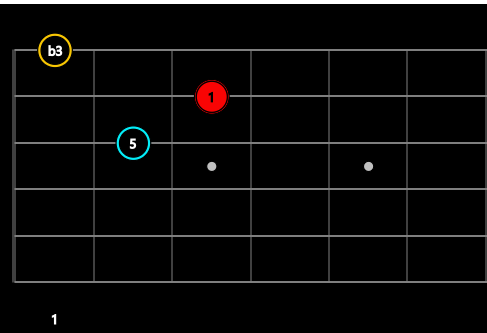 The only chords that maybe problematic when shifting them are ones with open strings in the chord. This is because every note in the chord shape must be shifted (as you did above). If you don’t therefore shift the open string notes, the sound flavour changes completely, because the relative distances between the notes have changed. If we had colossally long fingers every chord shape would be movable. Thankfully, we don’t!

When you combine a chord with a melody, there are these various relationships going on, making the overall sound. If the melody and the chords all shift the same amount, it all sounds the same, just higher or lower, and the majority of people wouldn’t notice. This is because our brains are wired to pick up the relationships (sonic distances between the notes involved) rather than the specific notes themselves. We have what is known as “relative pitch“. Some people have the ability to also recognise the specific notes (this is known as having “perfect pitch”), and could immediately play it on guitar. The rest of us typically have to to guess at the first note, say, and move that note around unil it matches. But then, once we’ve developed the ability to recognize musical distances (rather than just hearing them), we can then translate that into hand movement to locate the other notes at these relative distances.

It sounds different, and may well sound wrong. This is analogous to playing the tune wrong (as mentioned in part 1)
So … we hear relationships between notes, laid out in time.

We recognise these, can hear that tune in our head, maybe can hear the chords, the drums, the bass etc in our head, all with the right relationships. We’ve no idea what to call them, but can accurately ecall the melody say, if we like the tune.

We can easily detect when the relationships get screwed up, and when some note combinations desperately need to stop being played … the “bum” note when someone makes a mistake (or wants to annoy us!). Try this next chord …you’re not going to like it! 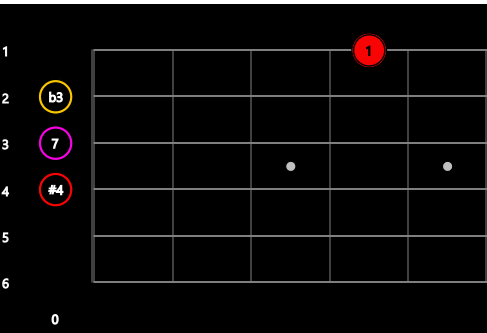 Strum it, and play it several times, making a different one of the chord notes louder than the others each time. I guarantee that the offensive note is the one on the 4th fret on the treble E string.

Now try this … your brain has clearly picked up the offending note, and in a playing situation in the future you may start to panic. Don’t. The fix is trivial. Slide the offender up or down one fret on the same string. Try it. This always works to reduce the clashiness you hear. In most cases the clash is gone. Rarely, the clash is lessened, but still there. Just slide down one more fret, and it’s definitely gone. (This is assuming that the chord underneath you hasn’t changed). 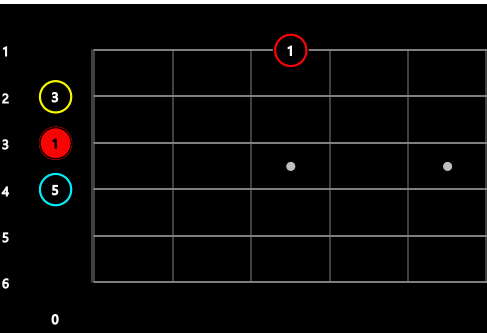 Try this … listen to some piece of music you’ve never heard before. Grab your guitar. Shut your eyes. Put your finger on some random string, random fret. Listen. Do as above if you hear a clash. A bit later, move somewhere else nearby and listen. Same idea. As the music changes underneath you, listen. Adjust. Have fun … there is no demanding technique here … just your ears, your brain, and your decisions to move as the sound dictates.

Anyone can try this, from day one. DAY ONE.

You’ve got the tools

Coming back to rhythm … suppose we play the “humpty-dumpty” rhythm of a 12-bar blues … a listener can easily latch on to that, dance to it, nod her head to it, recognise if we speed up or slow down, or go out of time. This is completely built in to us. So, you’ve got some pretty damn clever facilities in your head, and don’t let anyone try and persuade you otherwise. You can sense what’s right, what’s wrong, what’s in time, what’s out.
Also, because of our cultural experiences (such as living in Western Europe which strongly influences what music we are exposed to), we learn to recognise one note as more important than the other notes in a piece of music, and we learn to recognise how some notes, in relation to other notes, make us anticipate what’s coming up next. This is already built into you. How often have you listened to a new pop tune, and guessed where the melody is going?

What I’m talking about here is a concept known as “creating a sense of key” … one of your main jobs, to develop as a musician, is learning how this is done. It’s a lot easier than many would have you believe. Again, it’s all about relationships between notes, combined with giving prominence to some notes more than others.

These relationships affect how you solo over a chord, or chord progression; or equivalently, how you create a melody for a song, and how you decide to put chords to it (or vice versa). And the rhythm ties all this together.So, yes, you have these all in your psyche already, and can easily draw on this to learn the tools us musicians use to create this music that you can relate to.

And yet, the normal approach for teaching guitar is to pretend you have none of this experience, and then show you how to start knocking out a few simple chords, with no tying this back to what you have built in.

You don’t need to have your musicality supressed and ignored.  Quite the opposite. Things need to change.

You certainly don’t need mechanical proficiency to experiment with and learn about melody and rhythm. And there are loads of great sounding chords, easy to play, that don’t chain you to the bottom few frets of the guitar, that don’t slice your fingers to bits like the dreaded F barre chord.

What you are missing as a beginner is the knowledge that links the sounds you hear to your eyes and hands to producing these on guitar, the technique to play the notes on guitar, and learning what is available to you to create music you like, and that is memorable. You need to learn how to create melodies and chords that people can relate to; how to use repetition and structure (verse, chorus) and so on) massively helps this.

I hope you enjoyed this so far. All the best with your musical endeavours.