Turning Music Education On Its Ear!

Today’s challenge of learning and mastering a musical instrument hasn’t changed in over 50 years… until NOW!

The pain of learning music

We all have similar stories to tell about our first experience as children picking up an instrument whether it was with an independent or school-based music teacher.

My story began in the early 70’s with a piano and private instructor.  I would practice and practice, but not really getting it.  I could not forget the title of that piece, for my first recital, if I tried and “bubble gum” undoubtedly had an impact on my life.  After a painstaking recital, along with the difficulties that accompany learning to read music (the old fashion way) I never played the piano again.    I tried other instruments with the same result.   A couple of years later I picked up the trumpet, but it didn’t stick.  I struggled with reading music and memorizing the notes.    It just wasn’t fun to learn to play…

Our founder, Jerry, had his first experience when he was 10, his initial instruction with a guitar teacher was deadly dull and unmusical.  His first guitar lesson the instructor tied, “Every Good Boy Deserves Fun”.  Sadly, that irony was lost on him.  A few lessons under his belt and he never saw him again.  By his early-twenties, Jerry was a pretty good guitarist and intensely curious musically. (SIDE NOTE: Jerry’s Music Background below) He tried teaching himself theory from an old book on harmony by Walter Piston.   He couldn’t sight read, so 5 seconds of music notation written for piano (took twice as much effort) it could take him up to 15 minutes to decode, if the rhythm was complicated.   And without hearing the examples properly, he resorted to the words.  The jargon!

Chris, our other Director along with myself, also had a similar story.  At a young age, he was lucky enough to hear the guitar played ‘properly’ by a friend of his father’s when he was about 5 years old. The friend played flamenco, bluegrass and ragtime jazz.   It was love at first sound!   He begged and begged until, on his tenth birthday, he was given a Spanish guitar. It came with a songbook containing a set of utterly unattractive (to him) songs such as Kempton racetrack and little brown jug.   Using the book, he was able to get a hold of the chords D7, Am, E, etc., but without lessons, it was hard to make much sense of things.    Music at his school had the same issue as he saw it.   While his music class allowed you to bring in your favourite albums and to play them for the class, there was no attempt to teach students how the tunes, he loved, were played.   Chris figured this out on his own, using a recond player and wearing holes in the records. Despite this, Chris had held a lifelong passion for music. (SIDE NOTE: Chris’s Music Background below)

Despite access to more media channels and resources, the experiences are no different today for young musicians.  YouTube music lessons videos or other music portals that provide content, but limited context to the content.   Learning parrot-fashion can only take you so far… 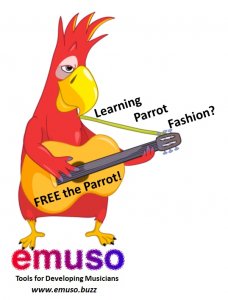 But it wasn’t until years later that Jerry decided to do something about it.    Jerry had become a professional guitarist and music instructor but always felt something was missing.   The process of teaching music put notation first, which is like learning to read before you can speak.   It can put up a learning barrier, requiring what may be a hugely demotivating effort (especially when combined with music jargon), exactly when the student needs the most motivation and encouragement for early success.

Jerry took on this problem head-on…

To give aspiring musicians the tools to rapidly develop musical skills and knowledge needed to make music.

In 2001, Jerry invented a different approach to presenting music theory as a favour to a friend with a nephew who was getting into guitar.  A book gradually emerged from that, as did some software prototypes in the mid-2000s.   This approach avoids music notation, instead of using a clock representation of intervals and using interval-based methods.   Through experimentation and testing with students, it became clear to Jerry that it is possible for complete beginners to create musical sounds from day one (clearly not requiring a developed mechanical technique).  Music can be learned through a natural learning process.

Jerry and Chris reconnected in early 2013.  Chris became very interested in this process, volunteered to get involved for the huge sum of £0 on an on-going basis.  Chris has been involved in many ways, business-wise, strategy-wise, content-wise, product ideas, marketing ideas, and eating too many Chinese lunches in Surbiton.     From the get-go, he very quickly latched onto the interval-approach.  This got him out of the old-fashioned (and hard) approach based on note names.   He quickly started to get some theory understanding that could be translated to guitar.  Later that year. Jerry founded MusicIncite, Limited.

While working on the MusicIncite team, Chris has been testing/investigating the clock representation that he’s recognized its power and simplicity at the same time (he was questioning the utility of the clock prior, not having really gotten into it). This clock representation makes it literally obvious, right in front of your eyes, as to what constructs (e.g. chords) are embedded in other constructs (e.g. a scale).

Chris had a lot of experience in UI design, as well as software architecture (having led a team developing a commercial flight simulator).  The UI skills were brought to bear, along with Jerry’s experience with software architecture, design, and implementation.  They spent four and a half years refining how this approach to natural learning for music could be embodied in a desktop application, emuso™, and accompanying interactive content.   Chris is always looking for ways to simplify the UI for emuso™, making it more obvious … and as someone that initially had very little idea about theory, this really helped keep things straight.  Of course, Jerry’s input is here too, the most recent being the rhythm explorer and ear trainer, which he redesigned from scratch.

So let’s look at this from another angle, as an instructor.    Jerry’s granddaughter, an 8-year-old girl, with no music knowledge, who had never played any instrument, sat with Jerry for about 4 minutes, with paper and pencil in hand.  In another 2 minutes, she was sitting at a synthesizer keyboard, and she correctly played a scale, and chords from that scale, in two different keys of her choice (although she didn’t know the name of the keys, nor the piano note names).     She loved it … she was making her own music, and it was musical.   She didn’t realize that anything special was happening … she just got on with it and had fun.

The principles Jerry touched on with his granddaughter are embodied in emuso™ and its content.

At the end of this period, the result demonstrates that learning music can be simple, instinctive and experimental, like all-natural learning processes.

The building blocks of music, rhythm, melody, and harmony are clearly exposed, demonstrated and explained while there is no notational barrier.  This encourages experimentation and exploration while writing and improvisational skills develop with it.

What’s really impressive is that Jerry has observed Chris’s music knowledge growing through his use of emuso.

As has Jerry’s (discovering new chord inversions, for example, and getting more rhythmic ideas).

Students’ ears, eyes, hands, and emotions deeply connect with the musical principles embodied in emuso, arming them with the tools needed to confidently play with others, write their own music, and understand other music, rather than playing it parrot-fashion.   All this with no initial need for music notation, and with little jargon.

emuso™ is designed for developing musicians looking to hone their technique, and for those musicians looking to develop their musical knowledge.  It enables easy creation of demanding practice routines.    Students explore musical sounds and their emotional impact from day one.

emuso™ is for any level musician, beginner to professional or student to teacher, who wants more than playing tunes parrot-fashion, who is looking for an innovative way to expand their part in the global conversation that is music and feel confident doing so.

The application provides the following components:

Lesson videos and interactions can be paused at any point to check something out in emuso, and then carry on.

As you interact with the lesson, the lesson player can detect mistakes and correct them.  Also, if you hear a chord, you like in a lesson video, demonstrated by interactive content, you can grab it, edit it, and save it off into your own chord collection.

emuso™ includes a set of virtual instruments including guitar, piano, bass,  violin, viola, and comes with chord and scale libraries for reference,  It also includes a powerful rhythm generator, brilliant for developing phrasing and timing skills.  Here are some ways emuso can benefit you:

The anticipated launch of emuso™ beta for PC and Mac in Q3, 2018, providing early access to beta-software at discounted prices, along with lessons for emuso™.    Until then, there is no Internet presence.

MusicIncite, Ltd., was founded in 2013, with the vision to empower musical development for all interested in Western-culture music and nurture musical progress in improvisation and composition around the world.  We believe that everyone should be equipped to join in the global conversation that is music.   Our flagship, music software platform is designed for students, teachers, and semi-pro musicians who want a fast, effective and transparent way to learn, reference and practice music.   emuso™ can be used stand-alone or as a complementary adjunct to music education that employs music notation.  It empowers students to see, hear, and play on-instrument even when their notation-reading skills and instrument knowledge are undeveloped.  We have employed natural learning processes that are surfaced through innovations in media synchronization and through the UX design.

In his early twenties,  Jerry was already a professional guitarist, and his band at the time (Eazy Money) had a track he wrote on a compilation album called “Metal for Muthas II” (EMI), featuring a great singer, Marc Storace.  Marc later joined Krokus, a big, big band of the 80’s, and Eazy Money broke up.  Jerry got fed up with music and guitar but was asked to record with his old bandmates, a few years later (early 30’s), and he could barely play.  He was embarrassed back into action, practiced a bit, joined the Guitar Institute on an Intermediate/Advanced course, where he met Shaun Baxter, who was head of rock/jazz there.  Jerry studied with Shaun for years and they became close friends.  Shaun influenced Jerry greatly, with his music.   Shaun is one of THE top guitarists in the world.

Chris’ early public music-making was singing the lead solos in Handels’ Messiah with his school orchestra in a concert series. After this experience, he was hooked and developed a love of performing.  Tossed aside when his voice broke he didn’t sing again till in his first band as lead singer at 16 till 17 years old.  During the time away from singing Chris was working through the old blues tunes he had collected and ‘teaching himself’ how to play the guitar.   A the age of 25, after being featured as a singer and or guitarist in numerous lineups, he threw in the towel and got a proper job. However, it wasn’t long before he was playing again (but purely for fun) with friends in a rented studio every week for many years. He wrote the tunes they played and recorded but still had no real grasp of theory and, as he freely admits, his lead playing could be pretty patchy.  From about 2006 he was playing semi-professionally again on a part-time basis with various bands. He formed his own band again as lead singer-songwriter and guitarist in 2010 and since has played gigs around his hometown under various names and line-ups. Since getting involved with emuso, Chris has taught himself the bass guitar and has gigged with various bands in that capacity too.